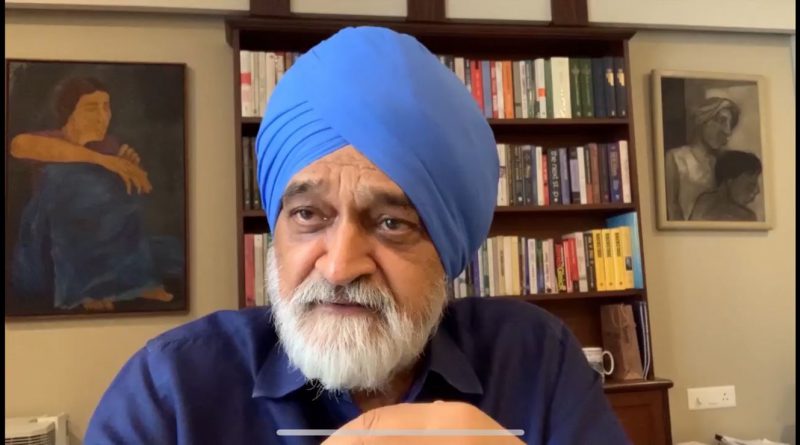 Mr. Ahluwalia’s 10-part lecture series began on March 10, 2021. The series follows a “flipped-mode” pedagogy, where a video on a chosen topic will be sent prior to the day of the live session.

The fourth lecture of the series was conducted on May 22, 2021. The lecture’s topic was ‘Climate Change Challenges’. He explained,  in the video, the repercussions of climate change worldwide, ideas to attain net-zero carbon dioxide emissions and other greenhouse gases. On the day of the session, the audience had a fruitful discussion with Mr. Ahluwalia.

The fifth lecture of the series was conducted on June 5, 2021. The lecture’s topic was on the ‘Problem of Finding Resources for Public Programmes’. Mr. Ahluwalia suggested sectors in which the Indian government should invest more. These sectors were the Health, Research and Development for Agriculture, and Defence sector. He emphasized the importance of investing in rural development. He also discussed ways to increase the revenue which can further be used for development.

The sixth lecture of the series was conducted on July 17, 2021. The lecture’s topic was on the ‘Pandemic’s effect on the Unprivileged and Elite Class’. Mr. Ahluwalia further discussed the developments in the Health Sector since independence and compared it with other countries. He suggested improvements for further development of the health sector. In the live interaction, he answered the thought-provoking queries from the audience.

The seventh lecture of the series was conducted on August 7, 2021. The lecture’s topic was ‘Education and Skill Development’. Mr. Ahluwalia explained the issues related to school, technical, university education. He also discussed the funding for private and public sectors. He said that the literacy rate of India has improved significantly since independence, but there is still scope for improvement. He suggested that India’s Research and Development needs to improve. For this to happen, he spoke about the need for universities to place a heavy focus on research. He believes this will lead to skill-based education in the country.