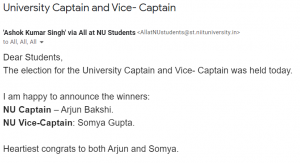 On March 2, 2021, NIIT University conducted elections to elect the Captain and the Vice-Captain, who will convey and address the various problems faced by students. Every year the Student Advisory Council aka SAC, which consists of student club coordinators and academic performers, votes for the best candidate in the Captain and Vice-Captain categories. The elections at NU make sure that girl representation is done at the highest level and that one of either Captain or Vice-Captain is necessarily a girl.