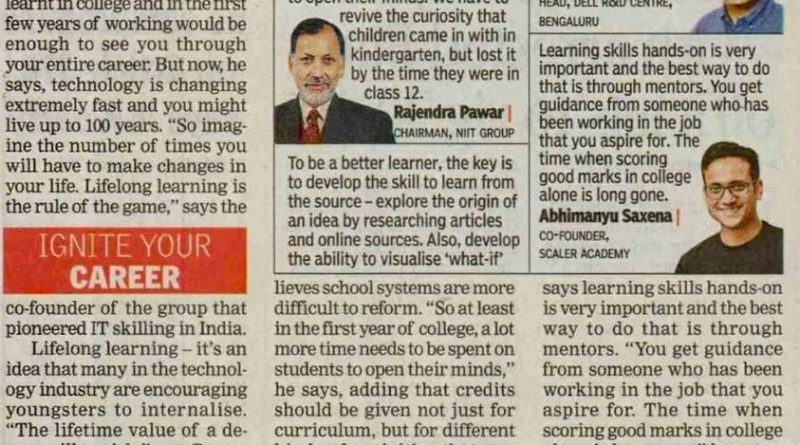 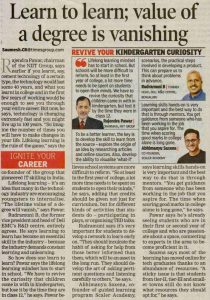 Slow and steady wins the race looks good in the old school books but the quote no longer does justice to the current concept of learning. The global stage demands the ‘Learning to Learn’ mindset throughout various industries. The ‘Times of India’, Delhi edition of June 23th, 2021, published the article under the ‘Ignite Your Career’ section, which included valuable insights from Mr. Rajendra Pawar, Chairman of NIIT Group.

Mr. Pawar mentioned how the gold on the degree is just dust that will vanish with time. The skills developed throughout one’s career will determine growth in a particular field. He vouched for the curiosity to be kept alive from kindergarten to Class 12, which is at its peak during development stages in learning. Although it is difficult to reform schooling administration, the target is still achievable. The initial assessments in universities should not limit themselves with academics as criteria but comprehend the activities as well.

Mr. Rudramani B., Former Head, Dell R&D Centre, Bangalore, too supported the points given by Mr. Pawar. He also added how the development of networks where interaction among social groups and colleagues and the passing of knowledge can be highly beneficial in the long run. Mr. Abhimanyu Saxena, Co-Founder, Scaler Academy focussed on the need for mentors to guide an individual throughout one’s journey. He also applauded the availability of resources on the internet that enhances learning. However, the lack of awareness by tier-II and tier-III is still a concern.

The process of learning has seen evolution year after year which has changed the definition of learning for the generations coming up. One thing that stays constant is the hunger to drive ourselves beyond our expectations and return to society in a fruitful way.